Let’s look at the diagram below.  At the beginning of each chapter, the timeline like the one below will be shown.  It will be a good reference to see which time period is being discussed in the chapter. 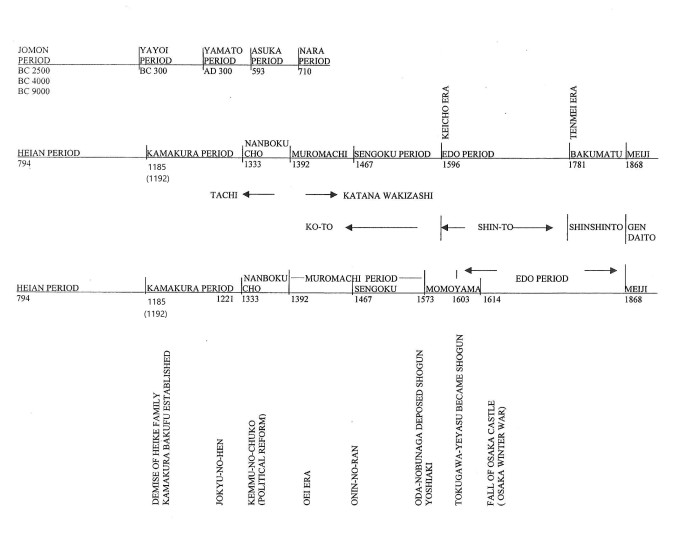 The top short line, from the Jomon period to the Nara period, is the time we call the Joko-to period in terms of the history of Japanese swords.  The term, “Japanese sword” we use today refers to the swords made after the Heian period (平安 794-1185).  Usually, Joko-to is in the category of the archaeological study.  In the next chapter, we will discuss Joko-to.  The bottom timeline and short descriptions underneath are the timelines we see in the general history books in Japan.  The middle timeline is more specific for the sword study.  My discussion will follow the middle line.

As I mentioned earlier.  The timeline diagram will appear at the beginning of each chapter for an easy reference.  The swords I discuss on this website are grouped together based on the shape, style, and the trend of the time.

Ko-to is the swords made between the Heian period (794-1192) and the beginning of the Keicho Era (1597-1615).  Shin-to is the swords made between around Keicho Era (1596-1615) and Tenmei Era (1781).  Shinshin-to is during Bakumatu time (幕末期 1789-1868).  Gendai-to is from the Meiji Restoration (明治1868) through today.  Keep in mind, even though the names of the eras or time changed overnight due to the political or dynastical changes through history, the changes in the sword style were always gradual.

In general history, the Bakumatsu time is the last part of the Edo period, however, for the sword classification, the Bakumatsu is from around the Tenmei era (天明 1781) through the beginning the Meiji, 1868.