Under political history, Sengoku Period (戦国時代),  is a part of the Muromachi (室町) period.  But under sword history, we separate the Muromachi period and the Sengoku period (Warring States period).  This is due to the sword style changed and the environment of sword making changed a lot.

After Onin-no-Ran (応仁の乱) has started (21|Muromachi Period), the beautiful capital city, Kyoto (京都 ) was in a devastating condition.  The Shogun’s (将軍) power only reached the very limited small area.  The rest of the counties were divided into 30 or so small independent countries.  The head of those independent countries was called Shugo Daimyo (守護大名 government officials, originally appointed and sent by the central government).  Also, powerful local Samurai became the head of the independent countries.  Each of those countries fought against each other to take over each other’s land.  At this time, vassals killed his superior and stole his domain, farmers revolted against their lords.  This is called “Gekoku-jo (lower class Samurai overthrow the superior)”.  This is the time of the Sengoku period (Warring States period).  The head of the domain was called Sengoku Daimyo (戦国大名 warlord).  Sengoku period lasts about 100 years.  Little by little, after long hard battles, stronger countries defeated less powerful countries and gained more territory.  30 countries became 20 then 10 and so on.  Eventually, a few powerful big Sengoku Daimyo (warlord) were left.  Each of those tried to fight his way up to Kyoto and unite the country.  The first person who almost succeeded was Oda Nobunaga (織田信長).  But he was killed by his own vassal, Akechi Mitsuhide (明智光秀), and Akechi was killed by his colleague, Toyotomi Hideyoshi (豊臣秀吉).  After Hideyoshi defeated Akechi and a few more warlords, Toyotomi Hideyoshi almost completed uniting Japan.  But one more person was left.  That is Tokugawa Iyeyasu (徳川家康).  Now, two big power clans were left.  One is Toyotomi Hideyoshi and the other is Tokugawa Ieyasu.  Both knew that their opponents are smart and powerful Daimyo, any wrong move on your part would be a fatal mistake.  So they stayed co-existed amicably on the surface for a while, though Toyotomi Hideyoshi tried Tokugawa Ieyasu made his vassal but Ieyasu somehow maneuvered well to avoid that.  For Tokugawa Iyeyasu, since he was younger than Toyotomi Hideyoshi, he knew that he could just wait until Hideyoshi‘s natural death.  And that happened.  After Hideyoshi’s death, Tokugawa Ieyasu fought with the vassals who used to work under Hideyoshi and won at the war of Sekigahara (関ヶ原) in 1600.  Then 1615 Tokugawa won against Hideyoshi’s son’s army.  After this, the Toyotomi clan ended completely, the Edo (江戸) period started.  Edo period is called the Edo period because Tokugawa Ieyasu lived in Edo, which is Tokyo (東京) now.

*Sengoku period is often depicted on TVs and movies.  People who lived through the Sengoku period had a very hard time but it is the most interesting time for TVs and movies.  Stories of Oda Nobunaga, Toyotomi Hideyoshi, and Tokugawa Ieyasu are the most favorite stories in Japan.  Especially Toyotomi Hideyoshi’s story is one of the most popular ones.  He was born in a poor farmer family who became the top of Japan.  This is one fascinating success story. 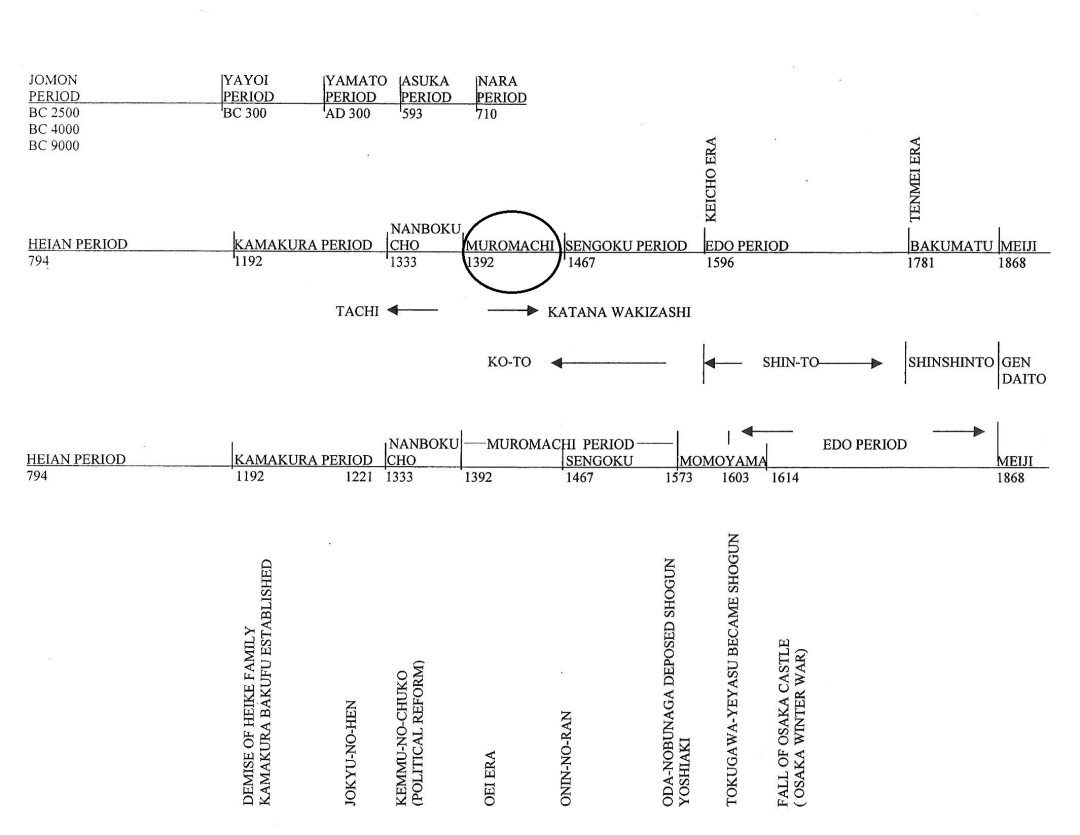 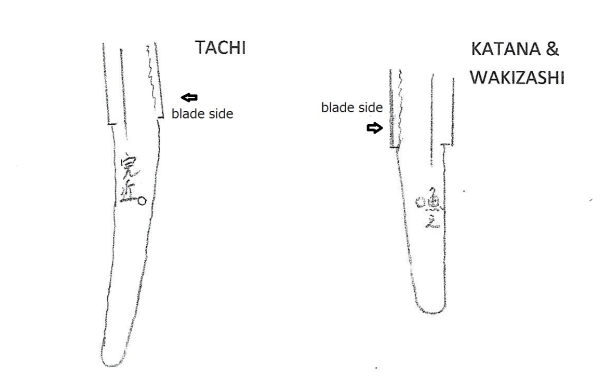 Shape (Sugata 姿)———Usually approximately 2 feet 3 or 4 inches (71cm) long. The shape of the Muromachi period Katana is somewhat like Heian period Tachi style.  But Muromachi Katana is not as grand, not as graceful as Heian period sword.  They are Koshizori.  Koshizori shape means the highest curvature comes lower than the center of the blade.  Suitable length and shape for wearing inside the belt. The width and the thickness of the sword are well balanced with the length.  Small Kissaki. 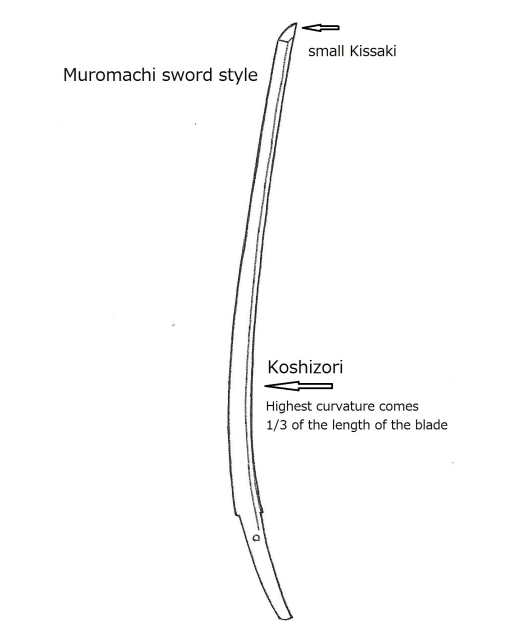 Hamon (tempered line 刃文) ———————- Nioi base. Tempered are is well balanced to the width of the blade.  Koshi-hiraita-midare mixed with Choji midare.

Boshi ————– Midare-komi, short turn back. Midare is irregular wave like hamon pattern.  Look at the illustration above. 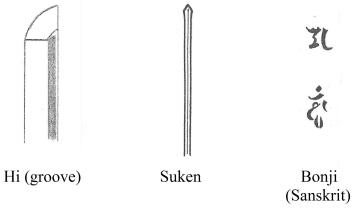 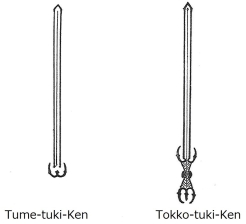 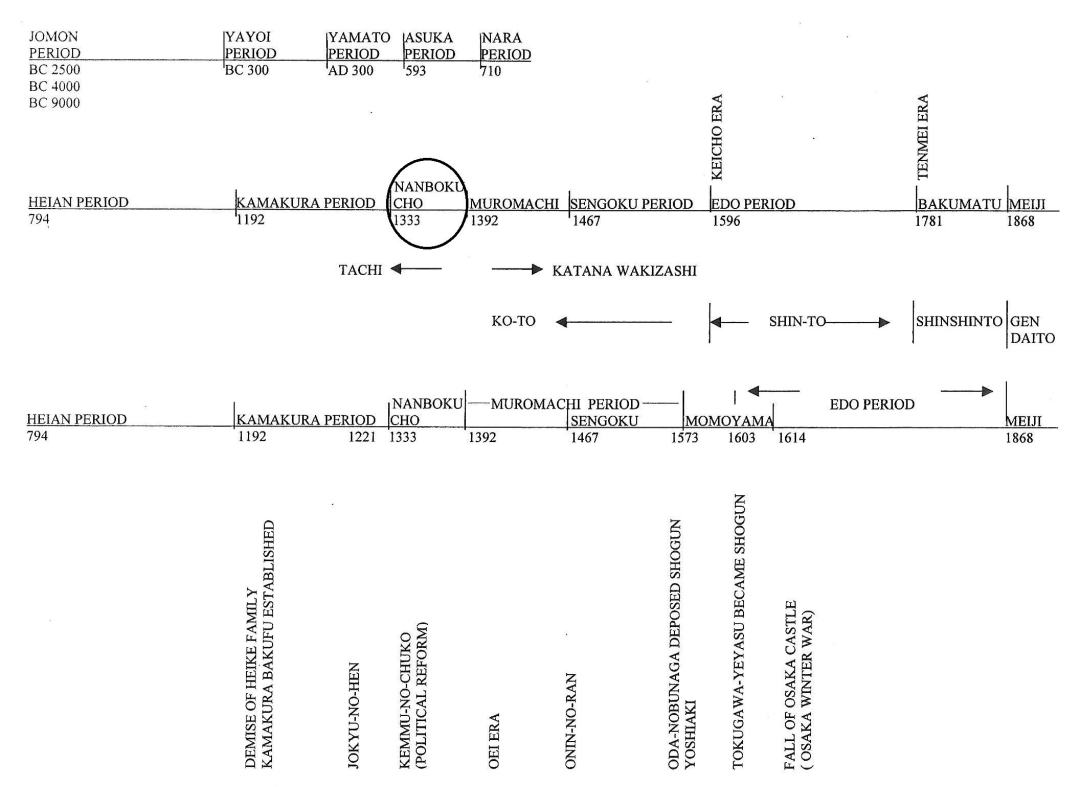 Ashikaga Takauji(足利尊氏) was one of the main people who ended Kamakura Bakufu and started Nanboku-Cho period – North and South dynasty -(refer to 18 Nanbokucho – history).

In the Muromachi period, the emperor’s power became weak, shogun (将軍) held all the political power.  Little by little, several groups of samurai who were called Shugo Daimyou (守護大名), started to gain the political power and economic power by holding the important offices in the Muromachi Bakufu (government).  They also owned a large land.  Some of the names of  Shugo Daimyo were Hosokawa family and the Yamana family.

Ashikaga family made a great effort to make the Muromachi Bakufu a sound political power through the political maneuver.  Yet by the time Ashikaga Yoshimasa (8th Ashikaga Shogun) became the Shogun, the Bakufu was corrupted very badly.  Shogun Yoshimasa did not pay attention to his job as a politician.  Instead, he was chasing women (his mother had to scold him for that), spend a huge amount of money to build a Silver Pavilion called “Ginkakuji” and retreated himself in there.  Shogun Yoshimasa did not have an heir.  Therefore his brother, Yoshimi was decided to be the next Shogun.  But later, Yoshimasa’s wife Hino Tomiko (日野富子)* had a son, Yoshihisa (義尚).  Now, brother

As a result of this battle, beautiful Kyoto was burnt down to ashes, the authority of Muromachi Bakufu was reduced to the only small surrounding area.

Kinkakuji Temple (金閣寺) Golden Pavillion—————-Ashikaga Yoshimitsu (足利義満) built Kinkakuji in 1397.   Rinzai-Shu (臨済宗) school Buddhistic temple, it was originally built as his second house.  It is designated as the world heritage.  It was burnt down by the arsonist in 1950, rebuilt in 1955.  The novelist Mishima Yukio wrote the novel  “Kinkakuji” dealing with the Golden Pavillion and an arsonist.  The famous quote, “ The gold bird (Houou in Japanese, it is a Chinese phoenix) on the roof of the Kinkakuji temple is stationary but fly through the space of the time eternally”

Hino Tomiko (日野富子)——————The wife of Shogun Yoshimasa.  She took advantage of her political privileges to raise a large amount of money, then loan them to the high officials with high interest.  She also invested in the rice commodity market to raise the price of rice and sold with a high profit.  The corruption reached an uncontrollable level.