The correct way to look for a curvature is to stand the nakago (茎) perpendicularly.   That way you can see where the curvature comes more precisely.  If the Nakago is not vertical, the curvature comes in the middle on any sword.  When you look at a sword, the first thing to do is to hold a sword so that the nakako is perpendicular.  When you look at a sword in a book, rotate (move or shift) a book slightly so that the Nakago is perpendicular.  You can see the real curvature of the sword in this way. 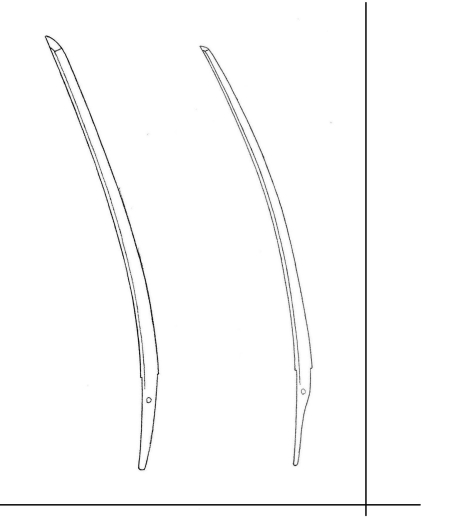 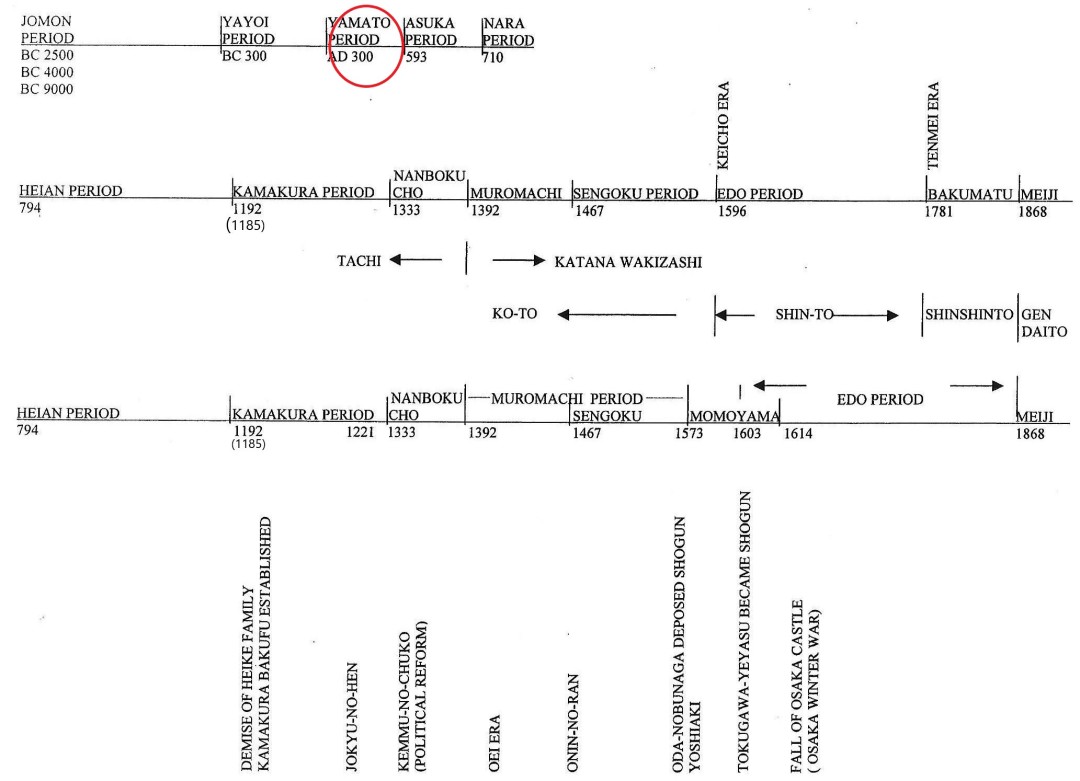 The red circle indicates the time we discuss this section.

Chapter 37 is a continuous and detailed part of chapter 3.  Please read chapter 3 before this section.  Refer 3 | Joko-To (上古刀）

Kofun (古墳) culture appeared around 4 to 6 century.  Kofun is a huge burial place for the powerful ruler at the time.  They are often called Zenpo-Koen-Fun (前方後円墳) that is, the front is square and the back is round shape.  If you look at it from the sky, it shapes like a keyhole.  The largest one is the Ninntoku Tenno Ryo (仁徳天皇陵) in Osaka, the tomb for Emperor Nintoku.  The length is 480M X 305M.  The height is 35M.  Inside the Kofun, we found swords, armors, bronze mirrors, jewelry, iron, metal tools.  Sometimes, iron itself.  The iron was only for the ruling class since it was considered very precious item then.  Outskirts of the Kofun, a large number of Haniwa*¹ were placed.  It is said they are for the retaining wall purpose or a dividing line for the sacred area.  Originally they were just a simple tube shape, eventually, it became very elaborate figurines.  Smiling people, smiling soldier, a dog with a bell around its neck, a female with hat, farmers, houses, monkey, ships, birds, etc.  Some of them are made very elaborately and very cute.  By looking at them, you realize people in those days wore elaborate clothes.  Haniwa is very popular among children in Japan.  We have a children’s TV program “Haniwa-kun”, Haniwa is the main character of the TV program.  Haniwa suggests to us what was their lifelike.  Their facial expression is all happy and smiling.   According to the old Japanese history book Nihon Shoki (日本書紀), it said Haniwa is the replacement of martyrdom, but it is not proved.

From another huge Kofun in Osaka, Ogonzuka Kofun (黄金塚古墳), we found a sword. Refer chapter 3|Joko-to.  The writing below is from my old college days note.  The hilt of the sword was made in Japan and the blade was made in China.  This sword has a round hilt and on this hilt, it shows some character.  It said “中平 {?}年”.  The third letter is not readable.  But we know 中平 is from 184 to 189 AD, and “年” indicate the year, therefore it was made between 184 to 189.  And this sword came out from the 4th Century tomb.    The professor explained to us how to determine when a particular bronze mirror was made by reading the half disappearing character on the back of it.  Also, he explained to us that a large number of nested Doutaku*²  was excavated from one particular place, fit inside one another.  Doutaku is a musical instrument for a ritual.  Therefore scholars think people then were being attacked by their enemy, so they hid Doutaku in a hurry and escaped.

In many countries, excavation is time-consuming tedious work and often it takes a long time to find anything.  But in Japan, it is not as hard as other countries.   We often find things.  It may not be what you are looking for, but we excavate items quite often. 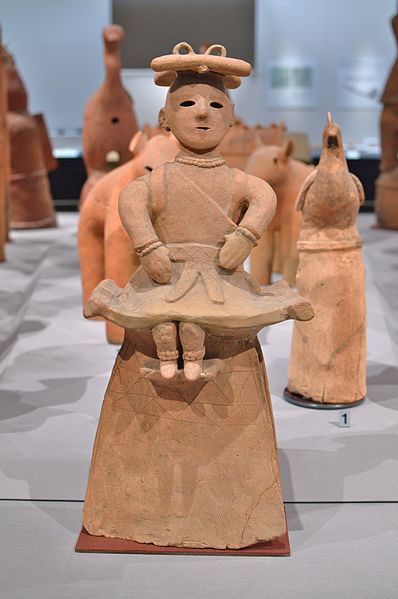 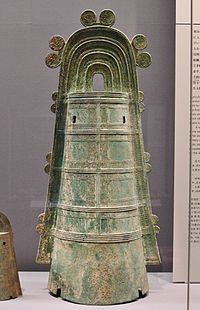 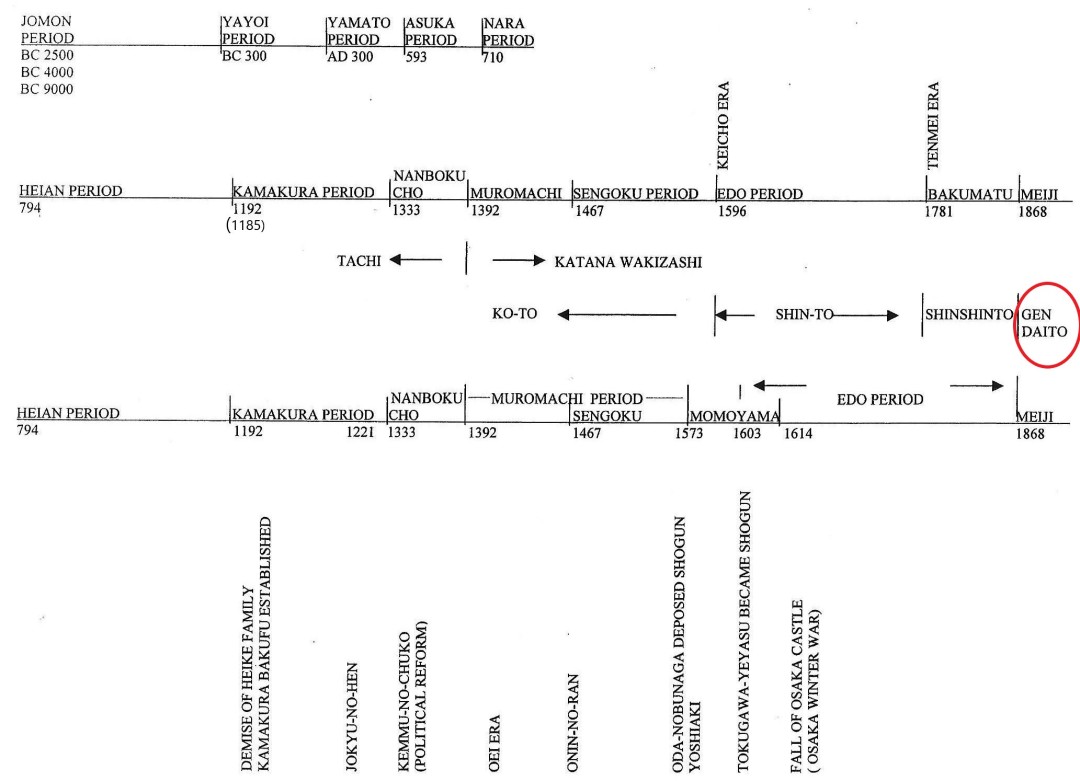 The above red circle indicates the time we discuss here

Chapter 36 is the more detailed and continued part of Chapter 2 Timeline.  Please read chapter 2 before this section.  Refer 2 | Timeline

In the chapter 2 Timeline, I mentioned Gendai-to (現代刀) is the swords made bewteen Meiji Revolution (明治維新1868 ) and the present time. It has been about 150 years since the Meiji Revolution.  Even though I simply categorized all swords made after the Meiji Revolution into one group as a Gendai-to, there is quite a difference in quality and variety.  The big difference is a Gunto (軍刀).  Those are military swords that were made to take to the World War I and World War II.  Some of them have a saber-like handle.  Those were not made to appreciate the beauty of the surface of the blade.  Among the Gendai-To, Gunto is usually considered much less value.  Among Gunto,  the sword made around the world war II is called Showa-To.  It often has a brown leather scabbard.  The color is similar to the Japanese military uniform.  Those Gun-To are not part of the study of the Japanese sword.

Around the time of the Meiji Revolution (明治維新), a sword called Meiji-Ishin-to (明治維新等刀) or Kin-Nou-to (勤王刀) were made.  Those swords were owned by famous historical figures like Saigo Takamori (西郷隆盛), Sakamoto Ryoma (坂本龍馬).   They are important historical figures who pushed forward the Meiji Revolution or restoration.  Those swords are a long sword and some of them are almost 3 feet long and have no curvature.

Today, many famous swordsmiths are forging wonderful swords. Some are recognized as a national living treasure.  Gendai-To is the sword made after the Meiji Restoration till now, but please keep in mind, there are huge differences in quality and variety among Gendai-To. 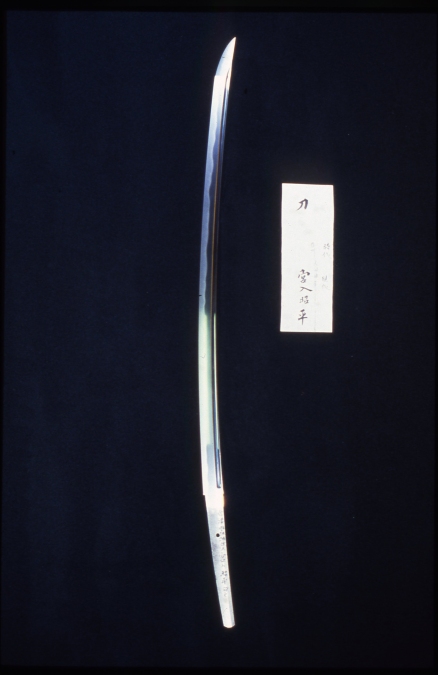