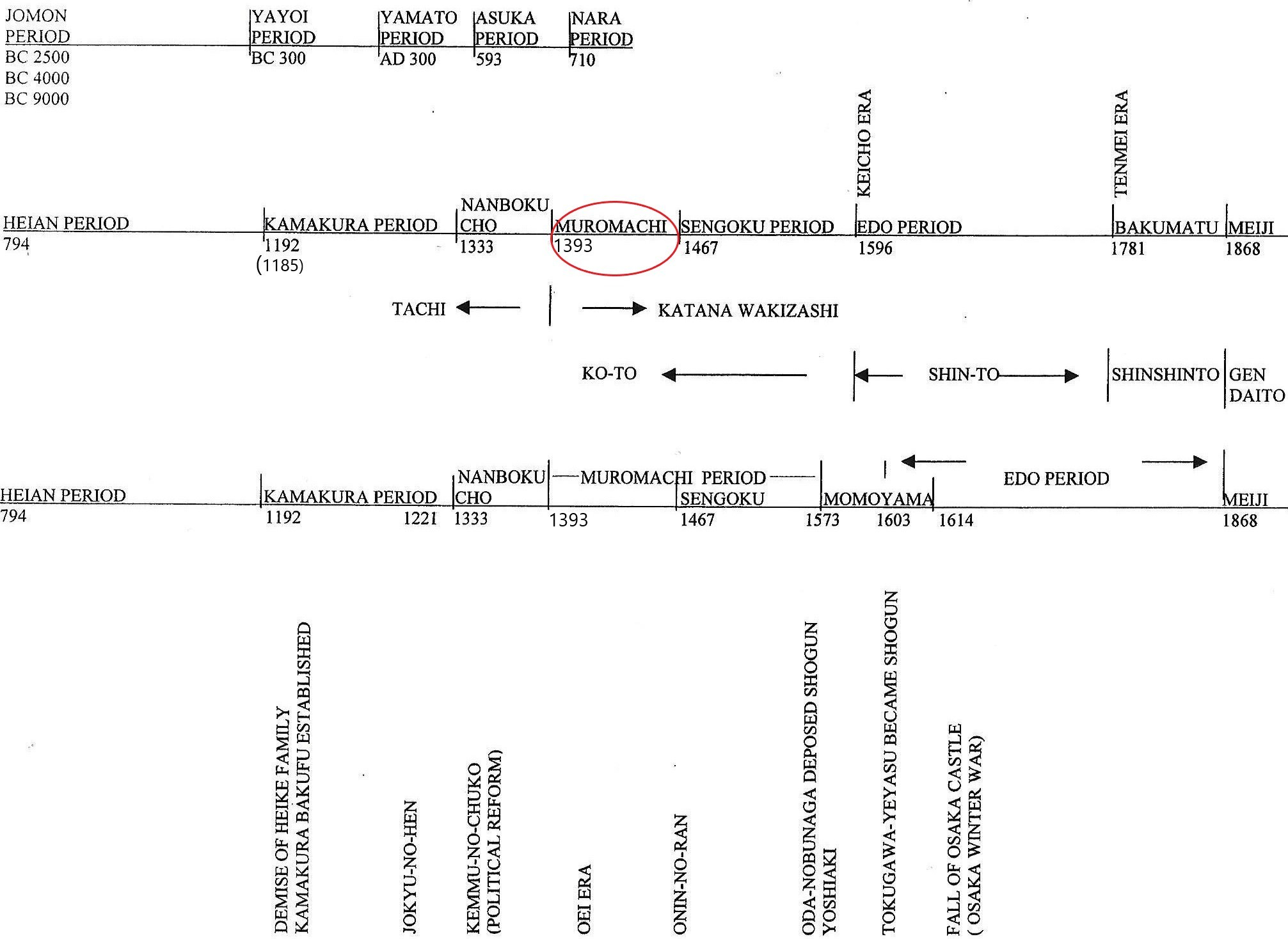 Kinkaku-ji Temple* (金閣寺: Golden Pavillion) ————- Ashikaga Yoshimitsu (足利義満) built Kinkaku-Ji Temple in 1397.   Later, it became Rinzai-shu (臨済宗) school Buddhist temple, but it was initially built as the second house for Ashikaga Yoshimitsu as well as a state guesthouse.  Today, it is designated as a world heritage site.  This temple was burnt down by an arsonist in 1950 but was rebuilt in 1955.  The novelist Mishima Yukio wrote the novel “Kinkaku-ji” related to the Golden Pavillion and the arsonist.  The famous quote in the book is, “The Ho-oh (A mythic golden bird, a Chinese version phoenix) on the roof of the Kinkaku-ji Temple is stationary, but it flies through the time eternally.”

In the Muromachi period, the emperor’s power became declined.  The Shogun (将軍) held all the political power.  Little by little, several groups of Samurai who were officially appointed as a Shugo Daimyo (守護大名: high-ranking officials) started to gain political and economic power by holding the critical positions in the Muromachi Bakufu.  They also owned a large land.  A couple of powerful Shugo Daimyo were the Hosokawa (細川) family and the Yamana (山名) family.

The Ashikaga family made a great effort to make the Muromachi Bakufu sound and powerful through politics.  The beginning of the Muromachi period was peaceful and prosperous.  Yet by the time Ashikaga Yoshimasa (足利義政) became the 8th Shogun, the Muromachi Bakufu was corrupted very severely.  Shogun Yoshimasa did not pay much attention to his job, governing the country as a shogun.  Instead, he was chasing women (his mother had to scold him for that), spent a large amount of money on building the Silver Pavilion called “Ginkaku-ji Temple (銀閣寺),“ and retreated himself there.  Shogun Yoshimasa did not have an heir.  Therefore, his brother, Yoshimi (義視), was named to the next Shogun.

However, later, Yoshimasa’s wife Hino Tomiko (日野富子)* had a son, Yoshihisa (義尚).  Now, brother Yoshimi (義視) allied with a family of a high-ranking official, the Hosokawa’s (細川) while the son, Yoshihisa, tied with another powerful family, the Yamana’s (山名), and several other smaller groups of Samurai allied with either side and the war broke out.  This war is called Onin-no-Ran (応仁の乱) in 1467.  It spread out all over the country and continued for 11years.

Hino Tomiko (日野富子)*——————The wife of Shogun Yoshimasa.  She took advantage of her political privileges to make a large amount of money by investing in the rice commodity market to control rice prices and sold with a high profit.  Then she loans the money to the high ranking officials at a  high-interest.  The corruption reached an uncontrollable level.

As a result of Onin-no-Ran, beautiful Kyoto was burnt down to ashes.  The authority of the Muromachi Bakufu only reached the vicinity of the small surrounding area of Kyoto.  Onin-no-Ran caused the next period called the Sengoku period (戦国時代), that is the Warring States period.  During the Sengoku period, Japan was divided into 30 or so small independent countries and fought each other until Oda Nobunaga, Toyotomi Hideyoshi, Tokugawa Iyeyasu united Japan as one country. 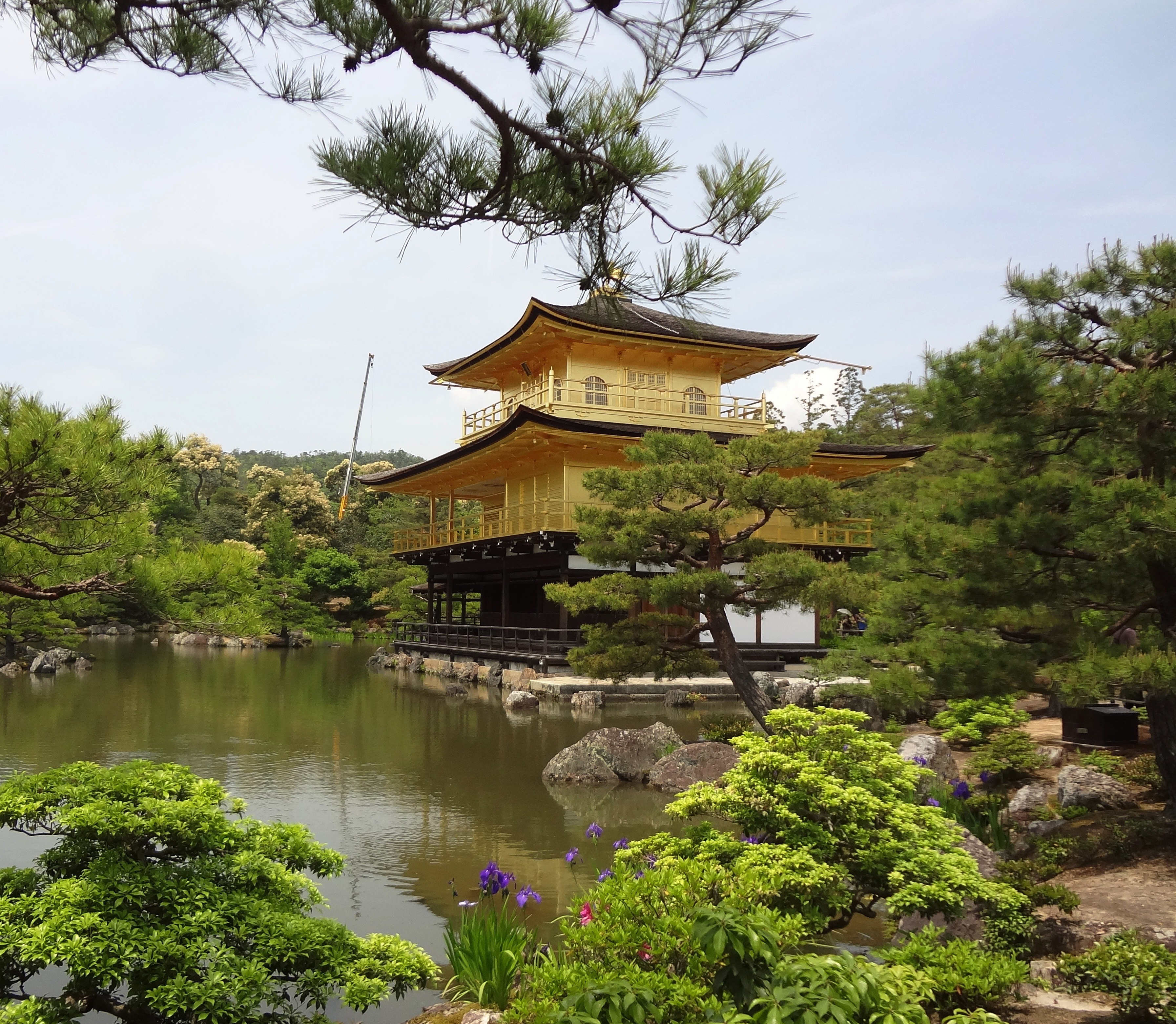 The photo was taken in May 2019, a family trip to Kyoto