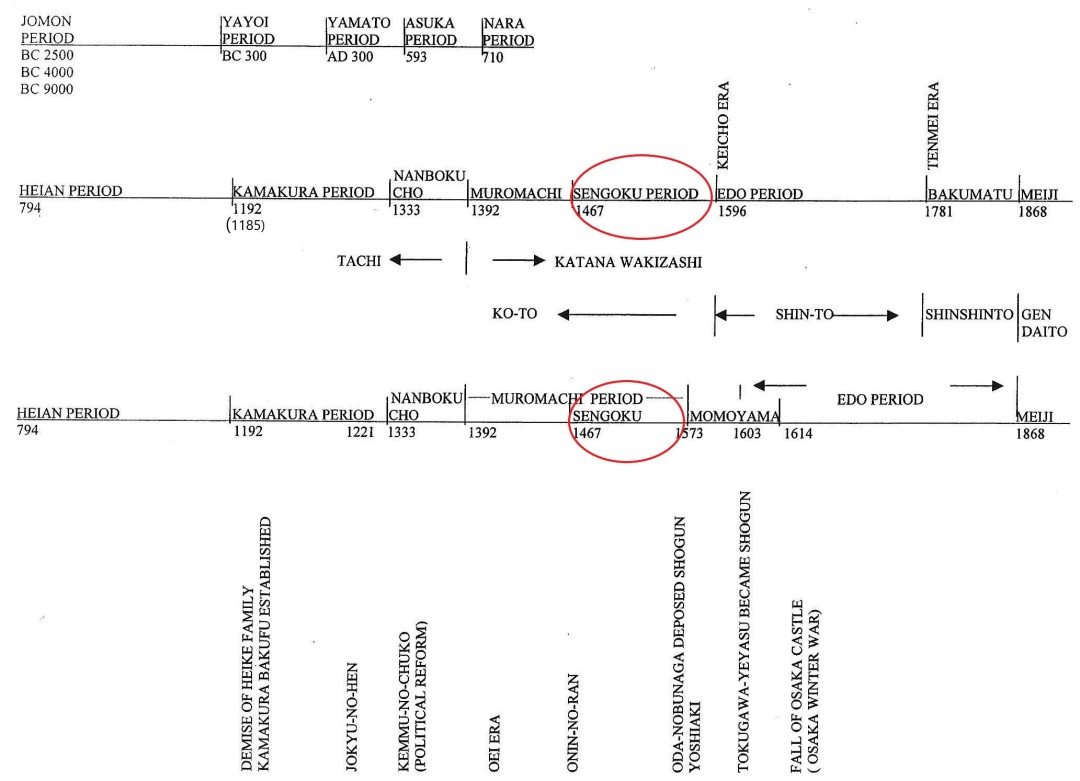 Please look at the two red circles on the timeline above.  According to the political history, Sengoku period (戦国時代) is a part of the Muromachi (室町) period, that is on the third line.   But under the sword history, we separate the Muromachi period and the Sengoku period (Warring States period), that is on the second line.  On the sword history, we divide the time this way because in those two periods, the sword style changed and the environment of sword making also changed.

After Onin-no-Ran (応仁の乱) had started (discussed in 21|Muromachi Period), the beautiful capital city, Kyoto (京都 ) was in a devastating condition.  Shogun’s (将軍) power only reached to the very limited small area.  The rest of the country was divided into 30 or so small independent regions.  The head of those independent regions was called a Shugo Daimyo (守護大名).  They are government officials, originally appointed and sent by the central government.  Also, powerful local samurais became a head of the independent regions.  Each of those regions fought against each other to take over each other’s land.  During the Sengoku period, vassals killed his superiors and stole his domain, farmers revolted against their lords.  This is called “Gekoku-jo (lower class samurai overthrow the superior)”. This is the time of the Warring States period called the Sengoku period.  The head of the region was called Sengoku Daimyo (戦国大名: warlord).  The Sengoku period lasts about 100 years.  Little by little, after long hard battles, more powerful regions defeated less powerful regions and gained more territory.  30 individual regions became 20 then 10 and so on.  Eventually, a few powerful big Sengoku Daimyo (warlord) were left.  Each of those heads of the larger regions tried to fight his way up to Kyoto to unite the country.  The first person who almost succeeded was Oda Nobunaga (織田信長).  But he was killed by his own vassal, Akechi Mitsuhide (明智光秀), and Akechi was killed by his colleague, Toyotomi Hideyoshi (豊臣秀吉)

*The Sengoku period is often depicted on TV programs and movies.  People who lived through the Sengoku period had a very hard time but it is the most interesting time for TV shows and movies.  Stories of Oda Nobunaga, Toyotomi Hideyoshi, and Tokugawa Ieyasu are the most favorite stories in Japan.  Especially the success story of Toyotomi Hideyoshi is one of the most popular ones.  His background was a poor farmer who became the top ruler of Japan, this is one fascinating success story.