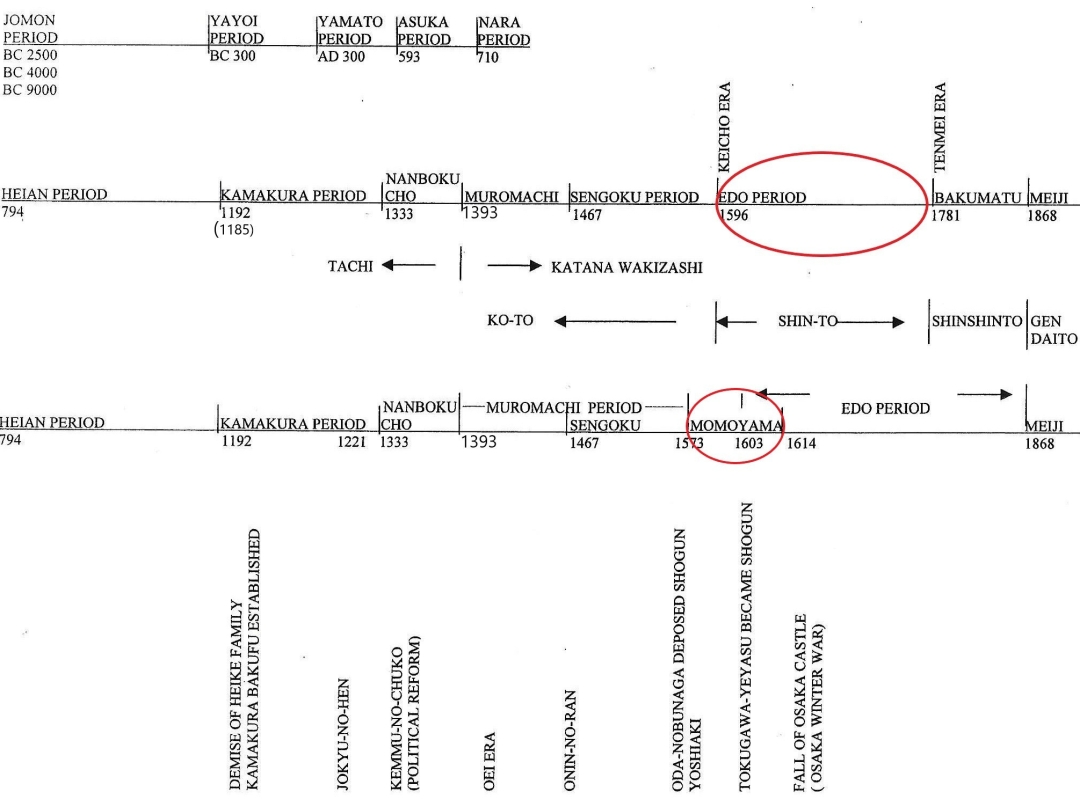 The circle above indicates where we discuss in this chapter.

Between the Sengoku period (戦国時代) and the Edo period (江戸時代) on political history, there was the time called the Azuchi Momoyama period (安土桃山).  It was from around 1573 to 1614, as shown in the third (bottom) timeline above.  This was the time when Oda Nobunaga (織田信長), Toyotomi Hideyoshi（豊臣秀吉) and Tokugawa Ieyasu (徳川家康) played central roles in politics.

After Tokugawa Ieyasu (徳川家康) won the battle of Sekigahara (関ヶ原の戦い) in 1600 and defeated Toyotomi’s vassals (Toyotomi Hideyoshi had already been deceased by then), Tokugawa Iyeyasu became the Shogun (将軍) in 1603.  This is the beginning of the Edo Period (江戸).  In sword history, as you see in the middle timeline above, the Edo period comes right after the Sengoku period.

At the end of the Sengoku period and during the Azuchi Momoyama period, the  economy grew a lot, and new culture flourished.  The gorgeous and spectacular art, such as paintings, architecture, interior designs, and handicrafts, were created.  The tea ceremony was developed by Sen No Rikyu (千の利休), and Kabuki also began to be performed around this time.  It was somewhat similar to the European Renaissance. Strangely, this new art emergence happened at the same time in Japan and Europe.

Around this time, many Europeans came to Japan.  That was the time of the exploration to the East by Europeans.  They were from England, Spain, Holland, and Portugal.  The novel “Shogun” by James Clavell was based on the real people’s stories, William Adams and Jan Joosten Van Londersteyn*¹ at the time.   You can see Jan Joosten’s statue in Tokyo Station today.  On my yearly visit to Japan, I stay at a hotel near Tokyo Station.  I often pass in front of “Yan Yoosten’s” statue.   It is located inside the Tokyo Station, underground in the middle of the bustling shopping area.  It can be very easily missed unless you look for it.  There is another statue of him outside the Station.

Shogun Tokugawa Iyeyasu hired William Adams and Jan Joosten (Japanese call him Jan Joosten, not his full name) as his advisers, and he acquired information on Europe from them.  Shogun Tokugawa Iyeyasu treated them well.  The area where Jan Joosten lived is now called Yaesu (八重洲) after his name, Jan Joosten.  William Adams changed his name to Miura Anjin and lived in the Miura area.  This place is approximately one hour and a half south by train from Tokyo today.  The records of these two people are well kept and can be found easily.

Europeans brought many European goods and ideas.  Although Christianity became popular and widely spread in the early Azuchi Momoyama period, Toyotomi Hideyoshi banned it later.  After the Meiji Era (1868), a religious restriction was lifted.

The Edo period began when Tokugawa Iyeyasu became the Shogun (1603).  It lasted until the Meiji (明治) Restoration in 1868.  Tokugawa Bakufu (Tokugawa government) was the only entity that governed the country during the Edo period.  The emperors existed, but the political power was shifted to the Tokugawa Bakufu.

Gradually, ports for the European ships were limited.  Eventually, Spaniards were not allowed to come to Japan, then Portuguese.  Japanese were forbidden to travel abroad.  By around 1640, a port town called Dejima in Hirato in Nagasaki prefecture was the only place in Japan that opened for foreigners to do business with the Japanese.  From Europe, only the Dutch were allowed to come.  Japan closed the country to the outside world until the Meiji Restoration (1868).

During the Azuchi Momoyama period and the early part of the Edo period, many European ships visited Japan.  Strangely, many of them shipwrecked near the shores around Japan.  One of the reasons is that Japan is a volcanic island.  Even if the sea’s surface does not show anything sticking up from the water, there are many obstacles underneath, such as underwater mountains and massive hidden reefs.  The Europeans did not have the waterway information that was common to the Japanese seamen.

Another reason why many ships were wrecked was that those ships were looking for gold.  When Marco Polo traveled to China, he heard from Chinese people that there was a small island country further to the east.  The land was wealthy, and the emperors’ palace was made of gold and silver.  After Marco Polo went back to Italy, he wrote a book (in late 1300) about his journey and published it.  In his book, he mentioned what he heard in China about the island country, Japan.  Even though he had never visited Japan himself.  The book was widely read in many countries in Europe.  When traveling to the East became possible for Europeans, they came to Japan to find gold.

Yes, Japan produced a large amount of gold.  But for the Europeans, it was too late.  By then, most of the gold was mined by the Fujiwara family in the Oh-shu area (奥州 Northern part of Japan).  The area includes today’s Aomori, Akita, Fukushima, and Miyagi prefectures, where the big Tsunami hit in 2011.  Toyotomi Hideyoshi also owned many gold mines but already mined as much as possible with the skills they had then.  Japan used to have many gold and silver mines all over the country.  Those mines were already exhausted, and only a few were left for mining today.

Throughout history, there have been facts and rumors about “Maizo-kin: 埋蔵金.”  Maizo-kin is the gold buried or hidden by the people like Tokugawa Shogun, Hideyoshi, and wealthy Daimyos and merchants.  Without having today’s banks’ vault, burying in secret places is the only way to store gold then.  Several Maizo-kins have been found, including one in the middle of Tokyo, Ginza.  There are still several big ones that haven’t been found yet.  Those are said to be Hideyoshi Maizo-kin, Tokugawa Bakufu Maizo-kin, and a few more big ones.  Although several maps indicated the locations of the Maizo-kin, those maps were fake, of course.  Today, whenever the ground is dug to build a large building structure, people start talking about a possible discovery of a big Maizo-kin.

Gold flowed out to outside Japan little by little over the centuries until the Meiji Restoration time.  Because the exchange rate between gold and silver was much cheaper in Japan compared to the rest of the world.  Today, we still mine gold on a small scale.

It is said that the name of the country, Japan, comes from Marco Polo’s book.  He called Japan “Chipangu,” which means “gold country” in his book.*²   “From “Chipangu” to “Zipang” to “Jipang,” it eventually evolved to “Japan.”  Japanese don’t call the country Japan but “Nihon” or “Nippon” (日本). 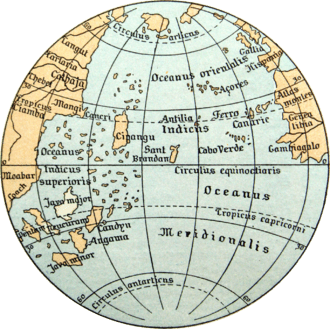