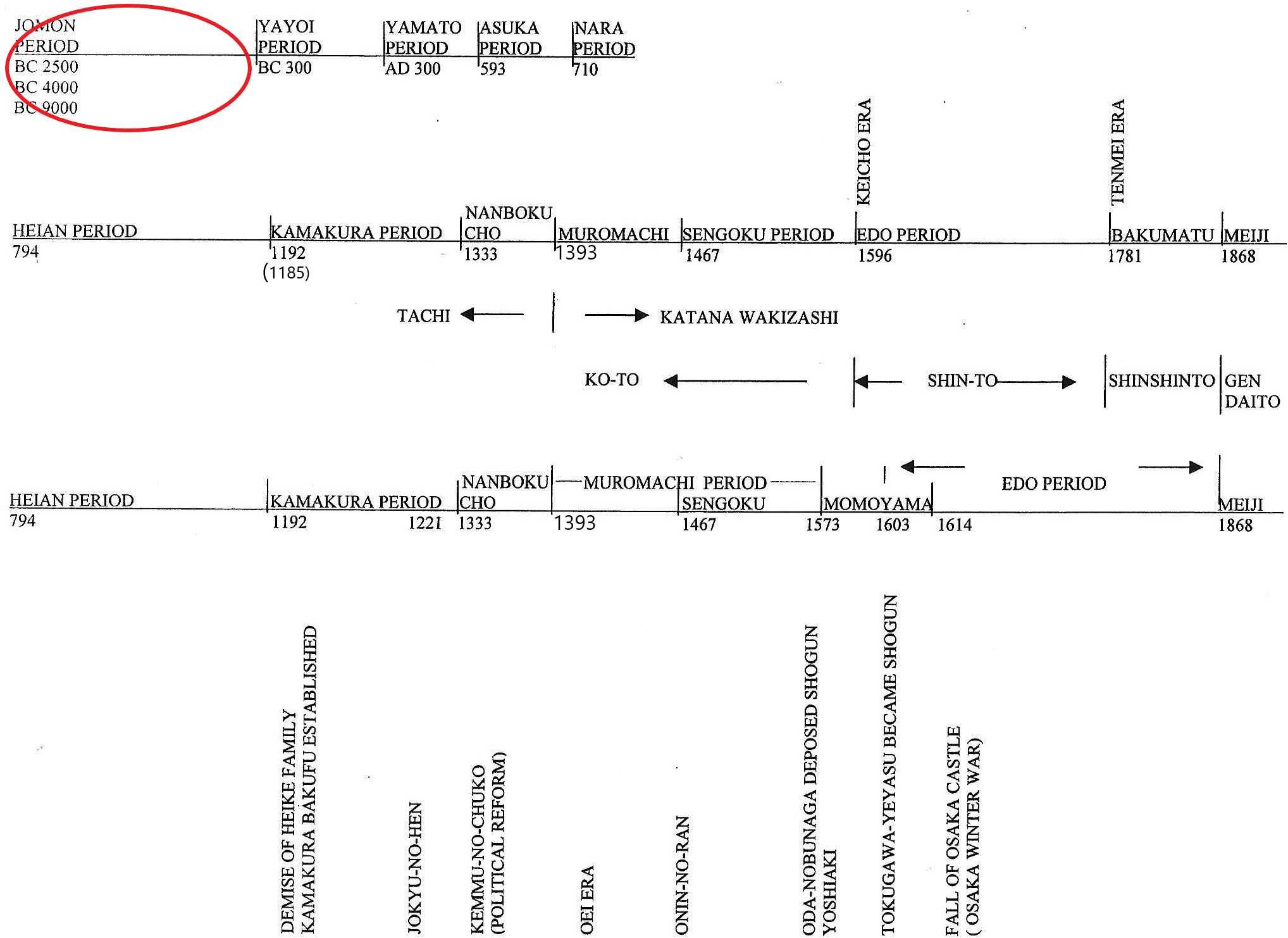 The Jomon period goes back to 9000 B.C.  This is the time of Paleolithic and Neolithic times. The characteristic of the time was the rope design (Jomon 縄文) on their earthenware.

We found a stone sword made during this time.  This is one-piece, approximately 27 to 31 inches (70 to 80 cm) long.  This is not a Neolithic type scraper.  This stone sword was made for ceremonial purposes.

Around 300 B.C., the Yayoi culture replaced the Jomon culture.  Yayoi culture characteristics show on their earthenwares.  They were a rounder, smoother, simpler design, and the techniques were much improved since the Jomon time.  They were named Yayoi culture because the objects of this time were unearthed in the Yayoi-cho area (name of the place) near Tokyo University in Tokyo.  They also discovered bronze artifacts such as a bronze sword (Doken 銅剣), bronze pike (Do-hoko 銅矛), bronze mirrors (Do-kyo 銅鏡), bronze musical instruments (Do-taku 銅鐸).  Those were imported from China and Korea, but the Japanese started to make their bronze items in the late Yayoi period.  Although iron artifacts were hardly discovered, it is said that we have evidence that the iron objects also already existed then.

It is said that according to the Chinese history book, “Gishi Wajinden” (魏志倭人伝), around 300 A.D., there was a country called Yamataikoku (邪馬台国) that controlled about 30 small domains in Japan.  The head of the country was a female figure called Himiko (卑弥呼), a shamanism maiden.  She sent a messenger to the Chinese dynasty in 239 A.D., and she was given the title as the head of Japan (親魏倭王), a bronze mirror, and a longsword (5 feet long).  Today, we still don’t know exactly loction of the  Yamataikoku.  This Chinese history book “Gishi Wajinden” (魏志倭人伝) explains how to get Yamataikoku, but if we follow the book’s directions exactly, we end up in the middle of the ocean, south of Kyushu (九州).  We still have a big debate over the precise location of Yamataikoku.

At the end of the Yayoi period, Japan was divided into small domains.  These domains were reigned by local clans called Go-zoku(豪族).  Around 400 A.D. most powerful Go-zoku united the country and named it Yamato-chotei (大和朝廷).  This is the first Japanese imperial court, the origin of the current Japanese Imperial family. They were very powerful to be able to build the enormous tombs called Kofun (古墳) for themselves.  In one of the famous kofun, Ogonzuka Kofun (黄金塚古墳) in Osaka, we found swords among other things.  The hilt of the sword was made in Japan, while the blades were made in China.  On the surface of the hilt, they depicted the design of a house.  The other objects we found from the Kofun were objects like armors, mirrors,  iron tools, and jewelry.                                                                                                Outside of the kofun, it was a common practice to place Haniwa (clay figurine).   Those Haniwa were smiling people, animals, houses, soldiers wearing swords, and sometimes simple tubes shaped Haniwa (埴輪).  We think they placed Haniwa as a retaining wall purpose or a dividing line for the sacred area.  Judging from the writings on the back of mirrors and swords, people used Kanji (Japanese characters) around the 5 to 6th century. 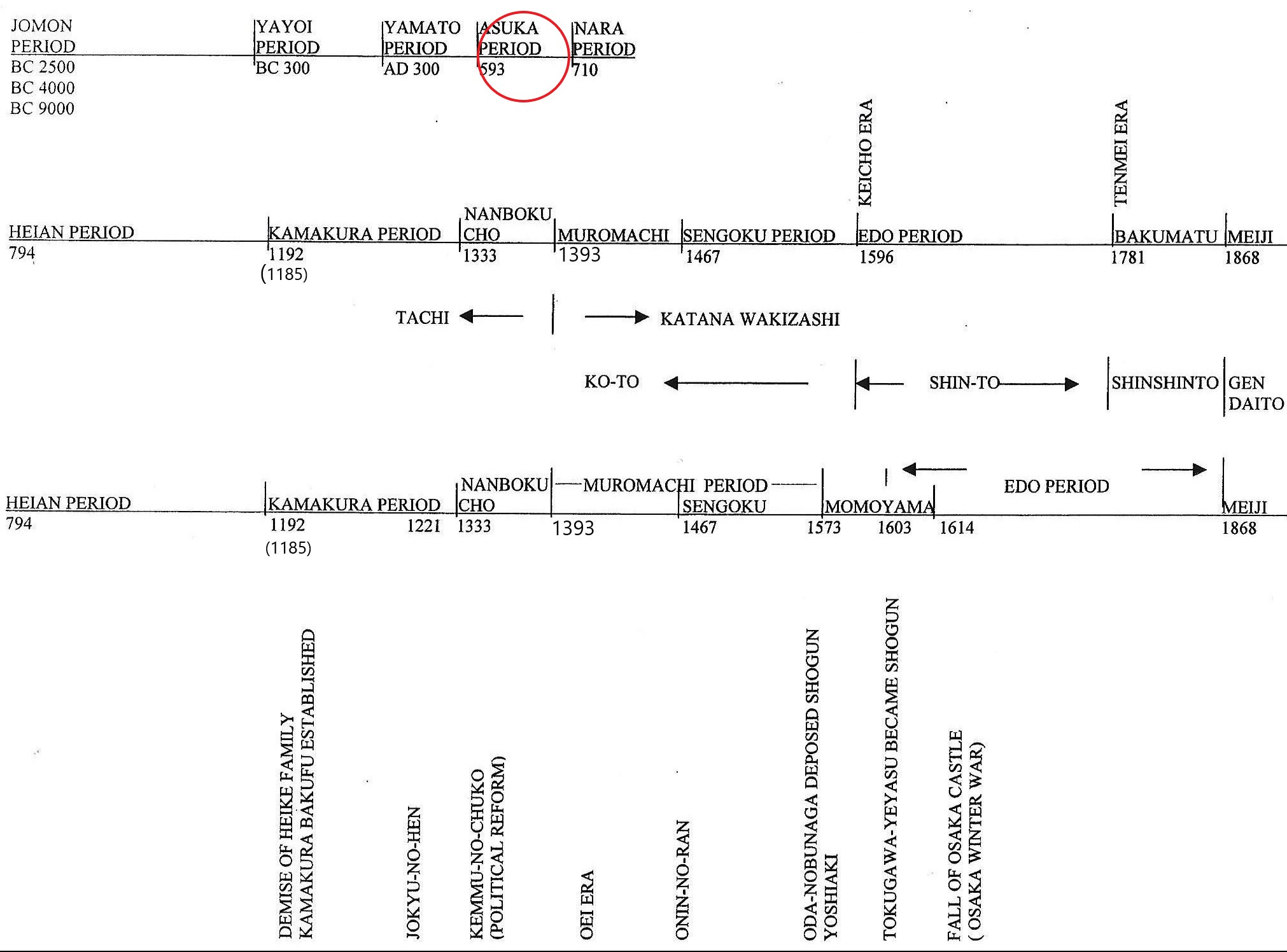 At the end of the Yamato period, after a long power struggle, Shotoku Taishi (聖徳太子) became a regent in 593 (beginning of the Asuka period).  Shotoku Taishi established the political system and set up the first Japanese constitution (憲法17条).  He protected and encouraged Buddhism and built the Horyuji temple (法隆寺) in Nara.  The face of Shotoku Taishi had been on 10,000 yen bills for a long time.  During the Asuka time, we see Kanto Tachi (環頭太刀).  The shape of the hilt had a ring shape.   Kan (環) means ring and To (頭) means head.  Also, on the ring shape hilt, we see some inscriptions, such as the Emperor’s name, location, and numbers.  The number indicates the number of years the particular emperor was enthroned.  Those were all straight shape swords. 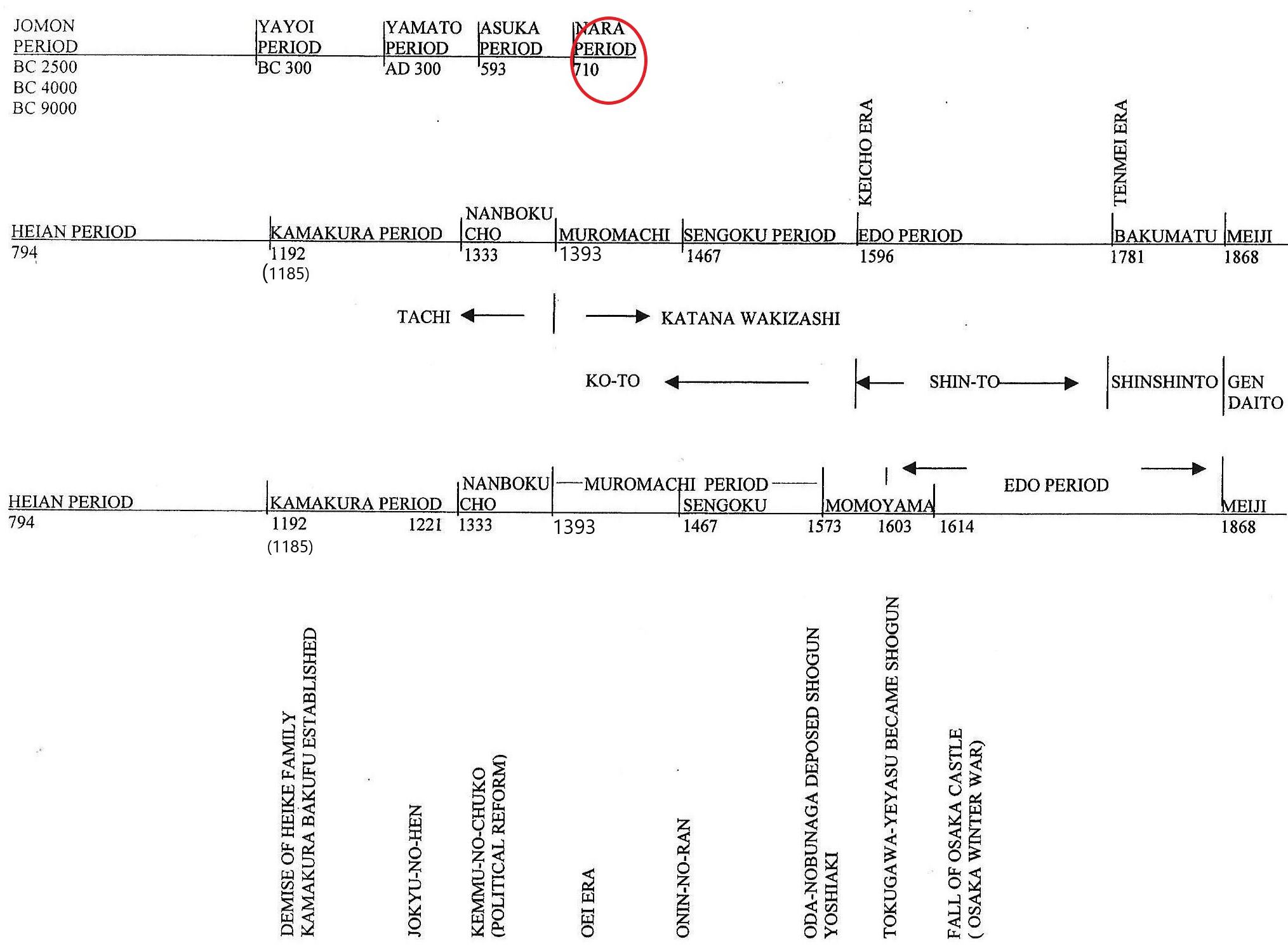 In 710, the capital city was moved to Nara, called Heijo-kyo (平城京).  The shape of Joko-to was straight, usually 25 inches (60 –70 cm) long.  They were suspended from the waist belt.  Some swords came from China, and others were made in Japan.  Many swords were found from Kofun and Shoso-in (正倉院) during the Nara period.  Shoso-in is a storage building where belongings of Shomu Emperor (聖武天皇) were stored.  Among those items, 55 swords were found there.  Those swords were called Warabite-Tachi. Warabi (Bracken) is the name of an edible wild plant that grows in Japan.  These swords were called Warabite-tachi because the hilt’s shape resembles warabi, whose stem curls up at the top.

The photo is from Creative common from word online pictures