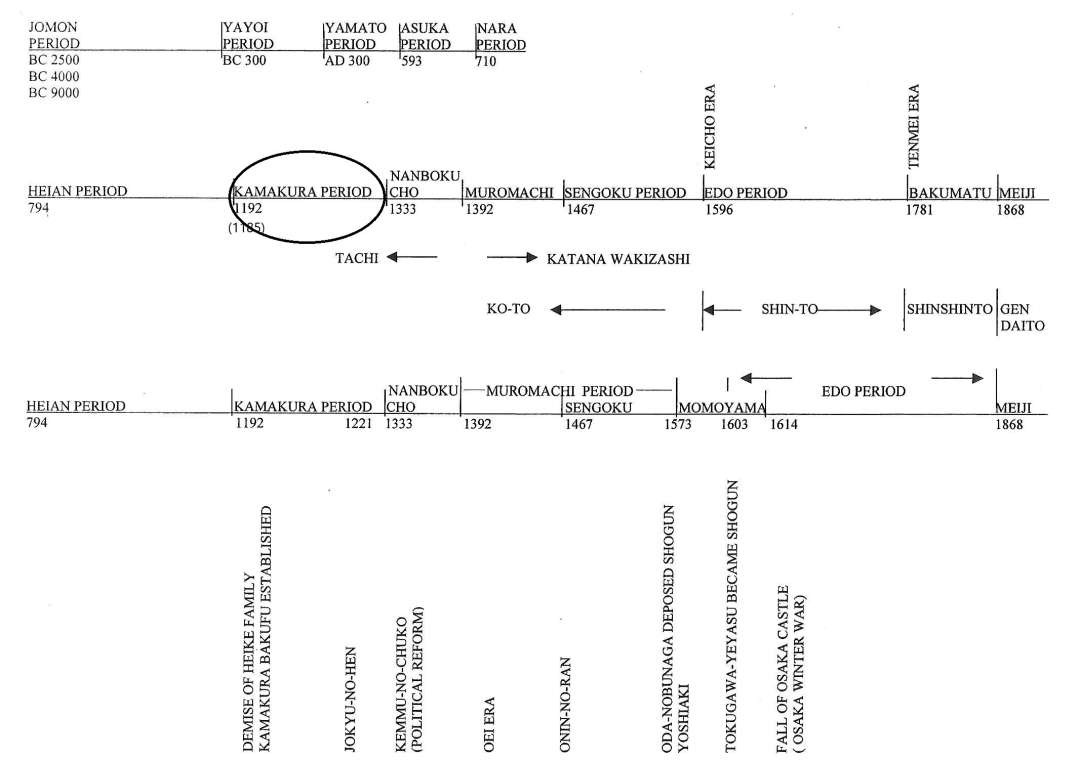 Kamakura period was the golden age of sword making.  Many valuable swords we have now were made during the Kamakura period.  The war between Genii clan and Heike clan in the late Heian period demanded more swords and more swordsmiths.

At the end of the Heian period, the Genji and the Heishi were the two major powerful Samurai group.  After the Genji (源氏) and the Heike (also called Heishi, 平氏) fought the first time,  the head of the Genji was killed.  As a result, a direct line of Genji, Minamoto-no-Yoritomo (源頼朝) was sent to Izu Island.  He was still a young boy then.  Izu island was considered very far away from the center of government Kyoto with its limited means of transportation then.  The Heishi clan became the top of society.  It was said, “if you are not a part of the Heishi family, you are not a human being”.  A society like that created too many enemies.   Meantime, Yoritomo who was in Izu island grew to be a young man.  He met Hojo Masako (北条政子) and married her.  She was a daughter of a small local official, Hojo Tokimasa in Izu Island.  Eventually, Minamoto-no-Yoritomo raised an army, with the help of his wife Masako and the Hojo’s family.  Together with Yoritomo, the Hojo family, and other Genji relations attacked the Heishi clan, chased them away from Kyoto and won the war, which ends the Heian period.  That was 1185.  The political power and military power shifted to the Kamakura government (鎌倉幕府) in Kamakura.  Minamoto-no-Yoritomo became Shogun in 1192.  It is debated whether the beginning of the Kamakura period should be in 1185 or 1192.

Yet the imperial court and aristocrats still existed in Kyoto.  Kamakura Bakufu had military, police and political power.  The imperial court was the department of public administration.  Thus, those two big rivals controlled the country in different fields and kept the balance between them.