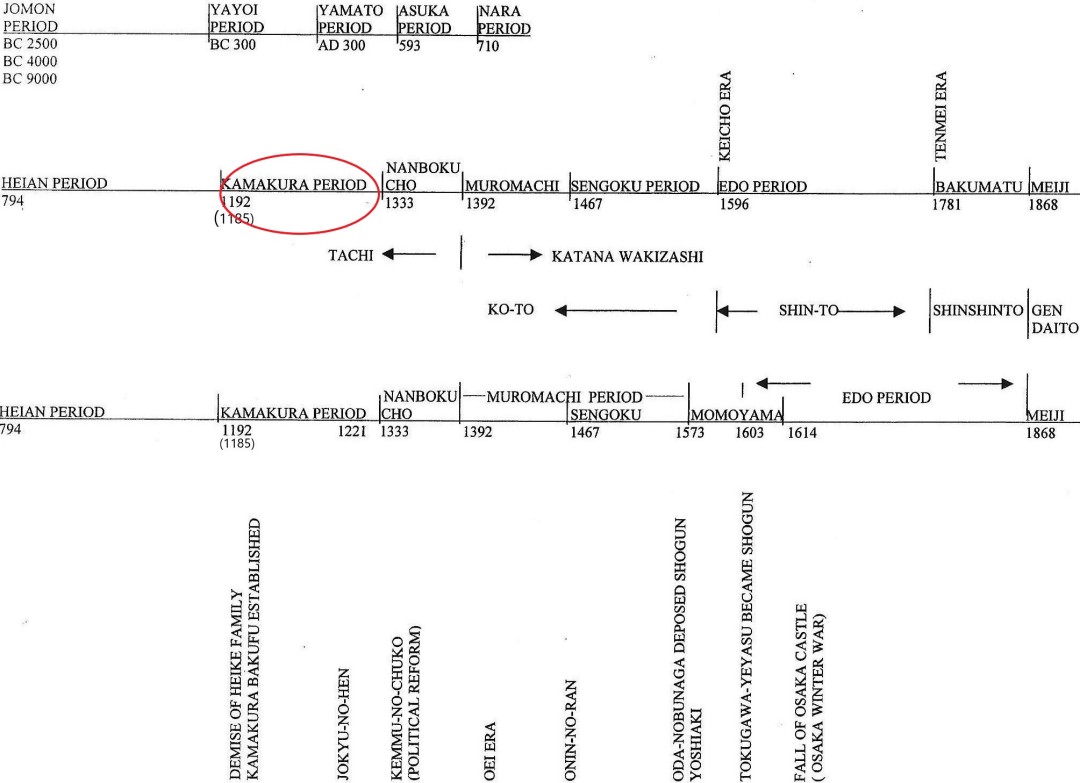 The circle indicates  the time we are discussing in this section

In the middle Kamakura period, we have three different styles to talk about. Yamashiro Den style, Bizen Den style, and Ikubi kissaki style (猪首切先) sword.  Ikubi Kissaki is a new style.  We say there are no mediocre swords among the Ikubi-Kissaki (猪首切先) swords.  As I described in the previous section, the Kamakura government (鎌倉幕府) had political and military power, yet the Emperor still existed in Kyoto(京都).  Emperor Gotoba raised an army and attacked the Kamakura government in order to regain the political power back. This war (1221) is called Jyokyu-no-Ran (承久の乱). The live experience from this war changed the shape of the sword to sturdier-looking shape, that is what we call Ikubi-kissaki style.

Carvings have three meanings in Ko-To time.  One is to reduce the weight of the sword.  They are Hi, Bohi (single groove), Gomabashi (wide, narrow, short or long grooves).  The second is for religious purposes.  For that reason, swordsmiths often carve the Buddhistic figures.  The third is for decoration.  In shin-To time, carvings became mainly decoration purposes. 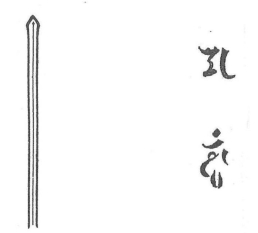 This is a series of entry-level lectures of the Japanese sword and its history for those who are interested in studying Japanese art swords.

The Japanese sword was basically designed as a weapon, but Japanese swordsmiths imbued qualities of grace and beauty into the blades as well as functional superiority.  The intricate patterns of surface and texture formed by their highly developed forging and tempering techniques were done only in Japan.  In the past, the Japanese looked at the swords as a spiritual symbol of samurai, temples, and shrines.  Nowadays, the Japanese regard the swords as a cultural art object made of steel.

Varieties of the appearance of swords are closely related to historical events. Textures, contours, and tempering designs are characteristics of a particular school (Den 伝) of swordsmiths.  This is a series of lectures that discuss the history of each period then talk about the swordsmiths’ schools which were active in a particular province at the time. Because of that, each section starts with the history of the time.   It is necessary to discuss the history to see the flow of the events which affected the shape and style of the swords.

Since the subject matter covers many centuries, I will concentrate more on “ko-to” (古刀).  The swords made between the Heian period (平安時代 794 – 1185) to the end of the Sengoku period (戦国時代 16th cent.) is called Ko-to.  These lectures will be discussed with my illustrations and photos of swords from my father’s collection* and the Sano Museum Catalogue**.  Also, I referenced the book, “Nihonto no Okite to Tokucho (日本刀の掟と特徴: The Rules and Characteristics of Japanese Sword)” by Mr. Honami Koson.  This is the book my sword teacher, Mori Sensei, used as the textbook in his class.  Other referenced books are, “Token no Mikata (刀剣のみかた: The Way to Look at Swords)” by Mr. Koichi Hiroi whom I have known since my intern days in the Japanese Sword Museum, “Nihonto Taikan (日本刀大鑑)”, “Nihonto Koza (日本刀講座)”, and several more.  The Reference chapter show more information on referenced books.

I was born and raised in Minato-ku, Tokyo, Japan then we moved to Kamakura in my late teens.  Currently, I live in Los Angeles.  I graduated from Meiji University and received a bachelor’s degree in literature and a curatorship license.  The required internship for the curator license was done at Nihon Bijutsu Token Hozon Kyokai (日本美術刀剣保存協会: The Japanese Sword Museum, often called NBTHK) in Tokyo.  Also, I graduated from the California State University of Northridge and received a bachelor’s degree in Economics.

My father owned a manufacturing company that dealt with metal.  As his hobby, he had collected Japanese swords and other types of Japanese art objects.  He was one of the administrators of Nihon Bijutu Token Hozon Kyokai.    He had been long deceased.

One of my father’s friends, Mori Sensei who was also the main administrator of the organization used to teach a Japanese sword study group in his house near my house.  I joined the study group.   Mori sensei’s class was a very rare and valuable kind because he was able to bring in top quality swords as study materials because of his position in the museum.  The kind of swords we studied with were top quality museum swords, the level like Jyuyo Bunkazai (important cultural Properties

), Jyuyo-Bijutsuhin (Important Art Object).  I don’t know how he managed to do it but he even brought one National Treasure sword.  Keep in mind things were a little different over 50 years ago.  Those are the kind of swords people could only see through the glass display cases.

Also, I studied the swords with my father since he kept many swords in our house.  Some photos of his swords are in the different pages.  This is how I started to get into the Japanese sword study.

*My father took the photos of his swords; those were his swords at the time the photos were taken.  After his death, they were no longer our family’s possession.

**Some photos are from Sano Museum Catalogue.  The permission to use was granted by Sano Museum.