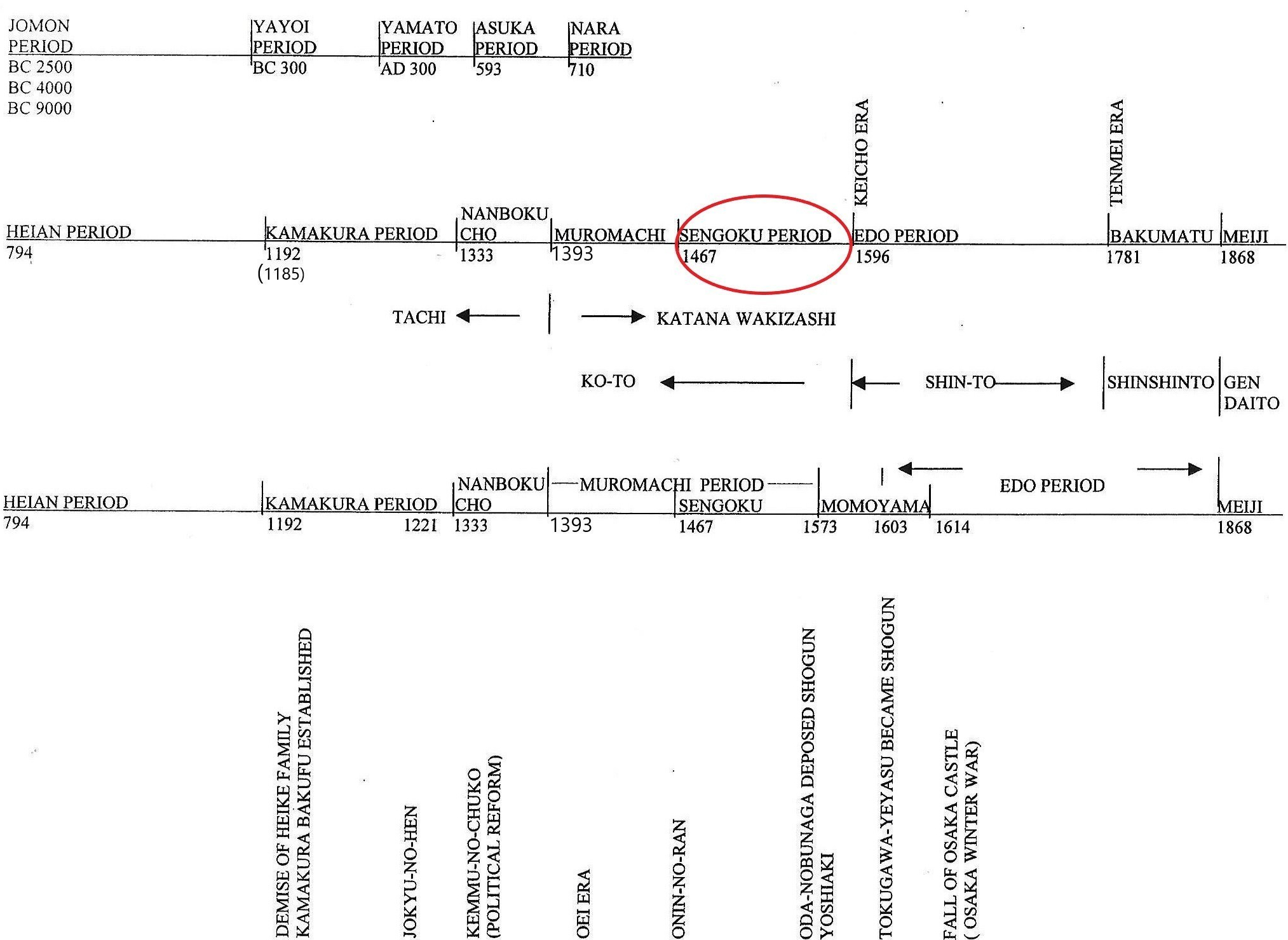 During the Sengoku period (Warring States time), the Mino Den group and Bizen Osafune group were the primary sword makers.  During almost 100 years of the Warring States period, all Daimyos needed a large number of swords.  If suppliers were closer, that was even better.  Many Sengoku Daimyos (戦国大名: warlord) could reach the Mino area easily because the location was convenient.  Since the Heian period, Mino swordsmiths were creating swords there.

One of the well-known swordsmiths of Mino Den at the end of the Kamakura period was Shizu Kane’uji (志津兼氏).  He was one of the Masamune Jitteru (正宗十哲)*.   But the real height for the Mino Den was the Sengoku period.  During the Sengoku period, the Shizu group and the Tegai group from the Yamato area and many swordsmiths from Yamashiro (Kyoto) area moved to Mino.  Mino became the busiest sword-making place.  They made very practical swords for the Sengoku (Warring States Period) feudal lords. 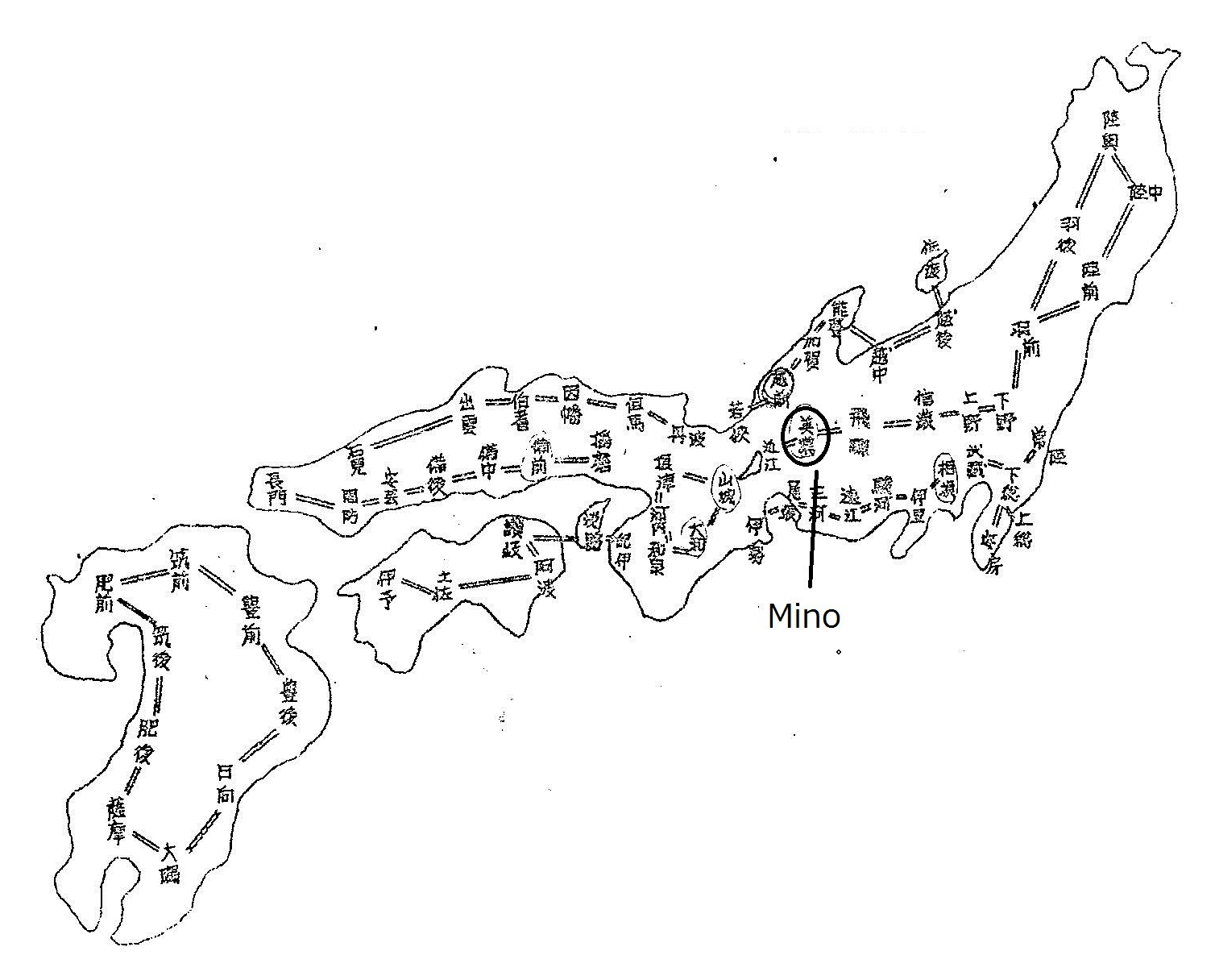 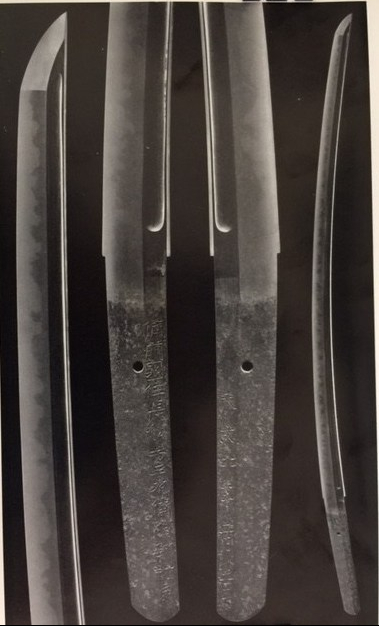 Characteristis on the sword above

Hamon is Kani-no-tsume (crab claw pattern, see above Hamon).  Kani-no-tsume pattern hamon never appeared in the Heian, Kamakura, or Nanboku-cho period.  This type of Hamon is one of the decisive points to determine as a Sengoku Period sword.  Marudome-hi (the end of the groove is round ) often appears on the Bizen Den sword during the Sengoku period.  Wide tempered area.  Midare-komi Boshi (Hamon on the body and the Boshi is the same type) has a long turn-back and an abrupt stop.  Hamon is the Nioi base.  Most Bizen swords have Nioi, with a few exceptions. 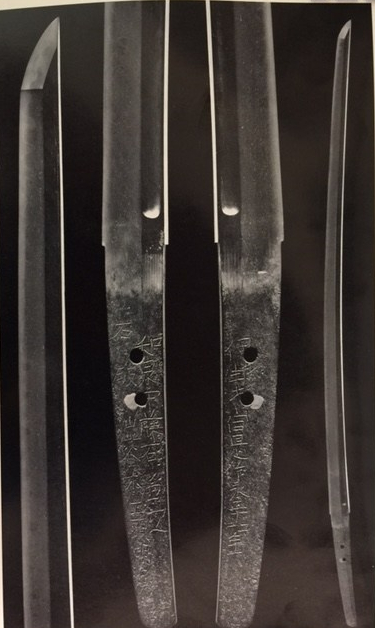 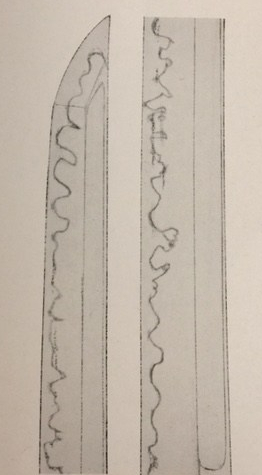 Characteristic  on the sword above

The last letter of the Kanji (Chinese characters) of the swordsmith’s name above is “㝎.”  We use this uncommon letter in place of common “ 定”  for him.  The reason is there are two Kanesada.  To distinguish him from the other Kanesada (兼定), we instead use the letter “㝎 “ and call him Nosada “のさだ.”

Izuminokami Fujiwara Kanesada (AKA Nosada) is the top swordsmith of Mino Den at the time.  The sword’s shape is the typical Sengoku period style: shallow curvature, Chu-gissaki (medium size Kissaki), and pointed Gunome Hamon.  The width of the Hamon is wide and narrow.  Often, Nosada and other Mino Den swordsmiths have wood grain patterns with Masame on Ji-hada.  Nioi base, mixed with coarse Nie. 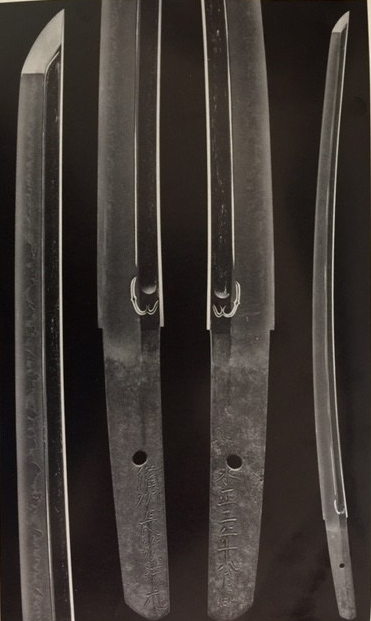 Characteristic on the sword above