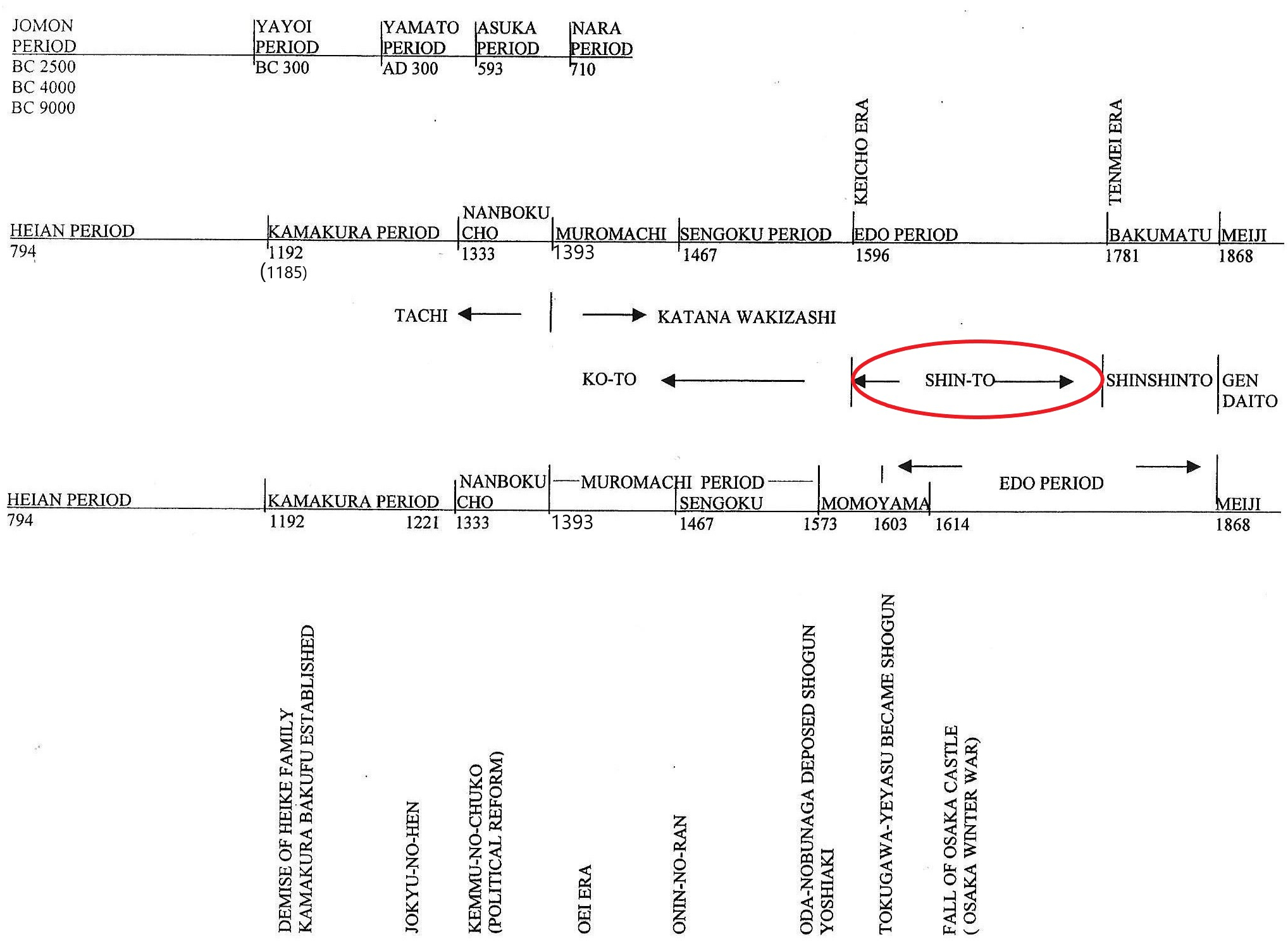 The circle indicates the subject discuss in this section

The previous chapter 25 stated that the Edo period was from 1603 to 1868.  This is for political history.  As seen in the third timeline above, the Momoyama period overlaps the Edo period.  Some people think the Momoyama period was from 1573 to 1600.   In terms of general history, there are several opinions on how to divide these transitional periods.  For sword history, it is clear cut.  The swords made between approximate 1596 (慶長: Keicho era) and 1781 (天明: Tenmei era) are called Shin-to.  The swords made between the Tenmei era and the Meiji is called Shin-Shinto.

After Toyotomi Hideyoshi almost completed to unite the country, people could enjoy a peaceful time.  This quiet time changed the geographic distribution of swordsmiths where they lived.  There were three major areas where the sword forging took place.  Those were Kyoto, Osaka, and Edo (Tokyo today) areas.  The rest of the swordsmiths gathered around near major Daimyos’ (大名: feudal lord ) castles.

Osaka—– Osaka was established as a commercial city and became the center of commerce.  They produced swords and distributed them to the other regions in the country.  Swordsmiths in Osaka : Tsuda Sukehiro (津田助広), Inoue Shinkai (井上真改).

By the time the grandson of Tokugawa Iyeyasu, Tokugawa Iyemitsu, became the shogun (寛永：Kan’ei era 1624 – 1643), swordsmiths spread out to other provinces than three areas mentioned above.  In each significant Daimyo’s territory, swordsmiths had their shops near the castle and fulfilled the demand for daimyo and subjects.  By the Genroku era (元禄: 1695), the swords-making declined, and people demanded more picturesque Hamon designs, such as Kikusui (菊水: flower design) and Fujimi (富士見: Mount Fuji).

Difference between Koto  and Shinto

The next section describes the difference between Ko-to and Shin-to.   But keep in mind, there are always exceptions to this rule. 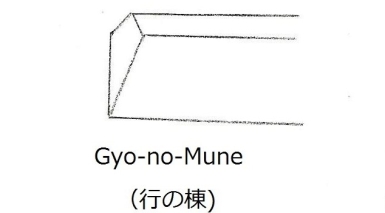 3.  For Shinto, Bo-hi ends a little below the Yokote line.  The Bottom of Hi rounded at above Machi.

5.  For Shin-to, if it is mainly made with Nie, it is coarse Nie

6.  Around the Machi area, Hamon starts with a straight tempered line (the bottom part of the blade in the illustration below), then Midare, or different types of Hamon comes in the middle, and it finishes with Suguha (straight hamon) in the Boshi area (the top part). In general, this is the standard Hamon style of Shin-to, but there are always exceptions. 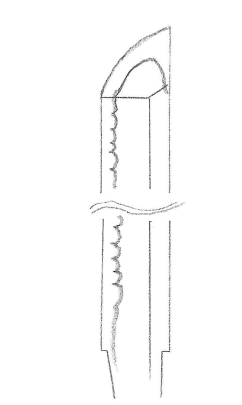 8.  The Nakago has a properly balanced shape.  The bottom of Nakago narrows down gradually.  The type of Yasurime (file mark) is Kesho-yasuri.  Engraved inscriptions show the swordsmith’s name, the location, and the province, with the year it was made.. 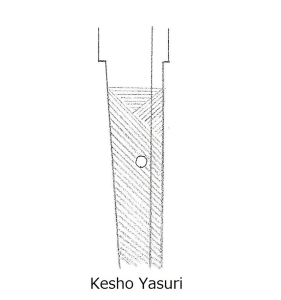