16|The Revival of Yamato Den （大和伝復活）

The circle represents the time we are discussing in this section

It is said that the first sword making started from Yamato province (present Nara prefecture) during the Nara period (710 to 704).  In the early sword making days, their forging technique was primitive.  At that time a large number of swordsmiths lived in Yamato, yet as time passes, the sword making declined in this area.

At the end of the Kamakura period, several powerful temples had power struggles against each other in Yamato area.  Temples had a strong political power and military power to control a large territory called Shoen (荘園) with their large number of worrier monks called Sohei (僧兵).  The most powerful group were called Nanto Sohei (南都僧兵)*.

The groups of Sohei demanded more swords to arm themselves.  The high demand of the swords from Sohei revitalized the Yamato Den (School) and led to increase the number of the swordsmiths in Yamato.   As a result, Yamato Denl became active again. Yamato Den style is somewhat similar to that of Yamashiro Den.  See chapter 6.

*Nanto Sohei (南都僧兵)———Since around the 11th century, Buddhistic temples became powerful under the protection of JoKo (retired Emperor).  Those temples had a large number of Sohei (low-level monks who also acted as soldiers) under them.  When the power struggles between the temples occurred, Sohei fought as a soldier in the battlefields.  Nanto Sohei were monk soldiers of Kofuku-Ji temple (興福寺).  Several large temples like Todai-Ji (東大寺) temple and other temples controlled the Yamato area. 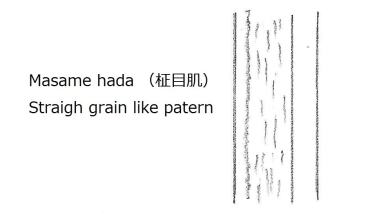 Nakago (Hilt)——————Often shows the finishing file pattern as shown below.  This is called Higaki Yasuri (檜垣).

Names of the Yamato School Sword-smiths