The red circle indicates the subject of this chapter 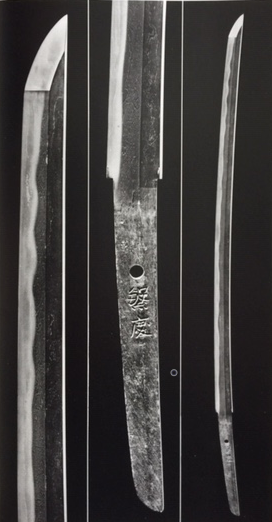 Many swordsmiths from Mino (美濃) area moved to Echizen and Kaga area (#4  & 5 on the map above).  Therefore, the swords made in this area are called Echizen- seki, and Kaga-seki.  Refer to 23|Sengoku Period (戦国) Sword for Mino Den.  The style of Echizen Yasutsugu (越前康継) is similar to the one of Mino Den.

Both Katana and Wakizashi in Hizen have a well-balanced shape. Hizen area tends to make swords with Chu-suguha-hotsure (a medium-width straight Hamon that looks like frayed fabric.) with fine Nie (沸).  The Boshi has a regular clean line with uniform width tempered line, as shown in the illustration below.  If you see a Shinto sword which has Chu-suguha Hamon and a Boshi that looks like the one below, it is often made by Hizen Tadayoshi (肥前忠吉).  Very fine Ji-hada (surface), sometimes called Nukame-hada.

The swords made in Satsuma have a solid look for both katana and wakizashi.  Kissaki (the top pointed area) is a little stretched.  Yakidashi (a few inches above Machi ) shows a small irregular Hamon.  Hamon is O-midare with coarse Nie called Ara-nie.  The Ara-nie forms Togari-ba (pointed pattern, see the drawing below).  One of the characteristics of this region is Satsuma-nie.  That is, the Ara-nie around hamon continues and blends into the Ji-hada area.  Therefore, the border between Ha-nie and Ji-nie is unclear.  Inside the Hamon sometimes shows a thick line shaped like lightning.  This line is called Satsuma-no-imozuru (sweet potato vine), less favorable than Inazume and Kinsiji.  This is the most prominent feature of the Satsuma sword.  Boshi has a narrow-tempered line with a small irregular pattern.  This is called Satsuma-boshi.  On the Ji-hada surface, Chikei (a long dark line like) appears.  This is called Satsuma-gane (薩摩金).